There were 15 finalists in the 2017 SA Pirelli Bike of the Year and only one winner. You might agree with the judges and you might not, so The Bike Show decided to take a look at each one and see why what was where. Click Next or Previous at the bottom of the page to see finalists, or click here to go to the beginning. In fourth place is the BMW G310R: 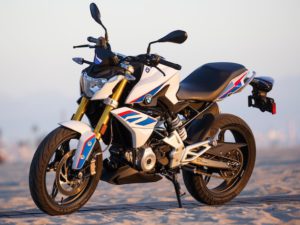 This is a big deal for BMW – their first go at the crucial entry level market, the same market that saw KTM become the biggest selling European motorcycle maker and helped Ducati reach their record sales levels. The G310R is not only BMW’s smallest capacity scoot but their first to be entirely manufactured in India with them taking hands with the massive TVS factory who turned BMW’s blueprint into a reality.

This might be their first try at this sort of thing, but this is BMW, ja, and things will be done properly. And properly they were done – the only clear indication that this motorcycle did not reach our shores from Germany is the handlebar switches, which look as though they were procured from Toys-R-Us. Apart from that, it feels about as German as a pair of lederhosen.

This was evident from the glowing smiles on the faces of the BOTY judges after they stepped off the Gee. It is nippy, light, compact, smooth, surprisingly comfortable and that motor is as entertaining a kitten tripping on catnip. Plus it is on sale for a class-shattering R62,000. This model should certainly see BMW once again smash their own sales record, and we can’t wait to try the GS version when they eventually release it.

With so much to praise, many people were somewhat perplexed that it didn’t win. The truth is that, while this is a big deal for BMW, it isn’t exactly entering a new class. Remember that KTM already has the Duke 390 that boosts significantly more power, more torque and features a TFT colour dash. While this all sounds lovely, many people (parents especially) consider the BMW to be a better all-over package, and that is why it made the top five in this year’s Pirelli BOTY.

Against: down on power, lacking some technology.