Story: Shaun Wray
You are probably wondering why there is a Triumph Bonneville balancing on a cooldrink crate with a curious looking Zimbabwean chap standing next to it. If not, you should be, because that is not normally where one would find a Bonneville. 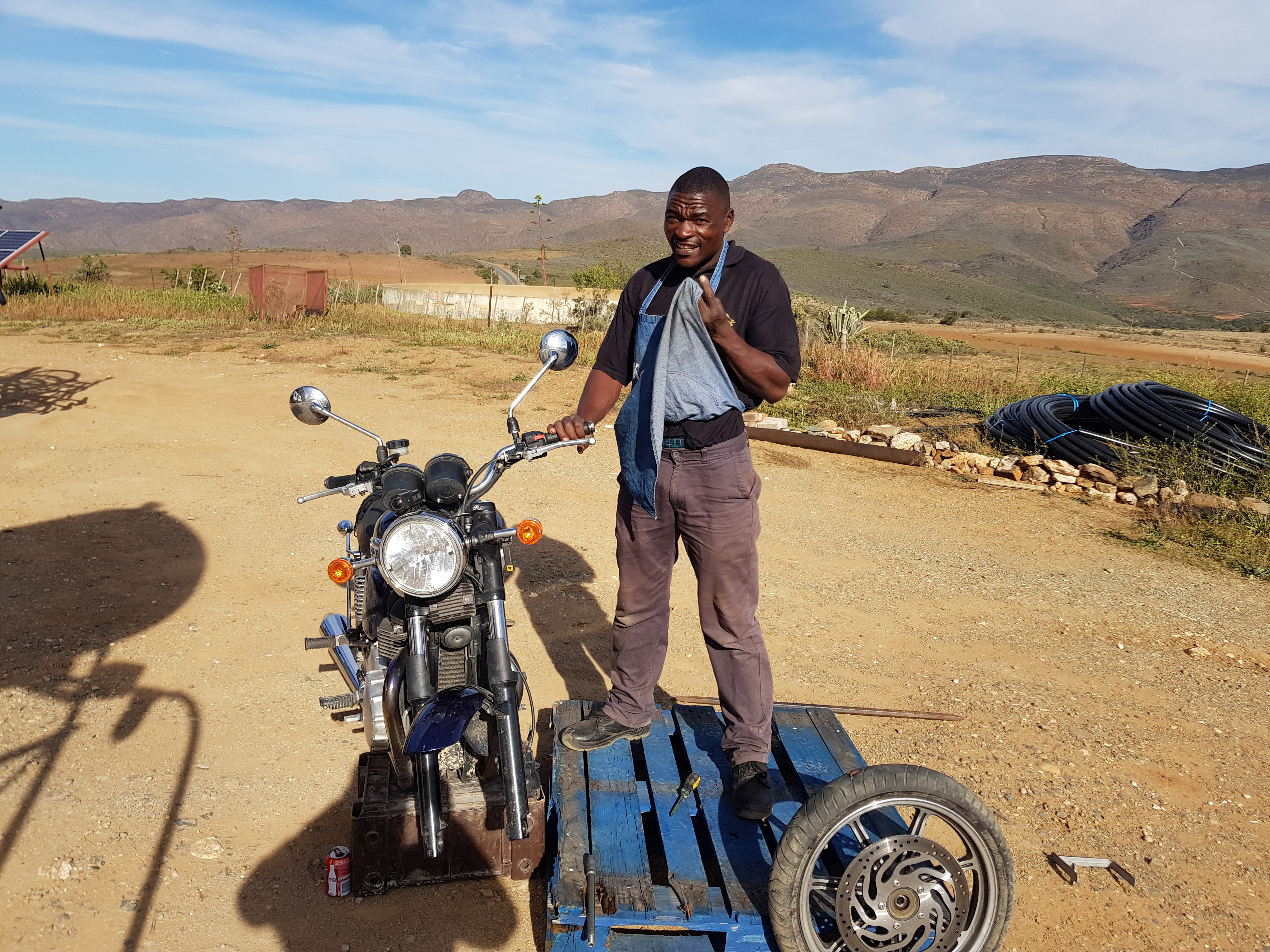 You see this particular Bonneville was about 1200kms into a 4000km road trip when it had an altercation with a rock on the famous Swartberg pass in the Western Cape. Although the actual trip started one day prior, the adventure started a few months before – 3 January to be exact. On this day I woke from a six-day coma and after spending a few days catching up with life and coming to terms with the fact that I was not far away from death, which didn’t scare me. In actual fact I was quiet relaxed with it, I spent the ambulance trip on the 28 of December taking selfies with the paramedic. What really pissed me off about nearly dying though was realising my life would have ended without doing a lot of things I wanted to, things that are within reach but keep getting put off because life happens. I needed to get out of the rat race and escape. My one true passion for as long as I can remember has been motorcycles, so much so that I made it my career.

I can attribute a lot of my motorcycle knowledge to my mom as I spent most of my childhood Saturday mornings under the watchful eye of Peter Jovaris who ran the Ducati store in Bryanston JHB. My mom would leave me there in the morning, go off to do her shopping and come collect me before they closed at 1pm. Peter, Mile and Zoki would entertain question after question, weekend after weekend as I tried to learn as much as possible about dry clutches, wet clutches, desmo valves and whatever else I needed to know about motorbikes. There was no denying I had an affinity with the Ducati brand but I liked and still do like all motorcycles. I never understood when people said this bike is shit or that one is kak – to me all bikes were a world unto itself and all had a place for us to escape.

I had spent so much time commuting on bikes over the years it became autonomous and although the William Nicol Grand Prix was always fun, I lost that place to escape to. That feeling I had got out of motorcycles growing up, whether it was my mate’s TZR50 race bike I learnt to ride on or my first RVF400, bikes were always an escape. 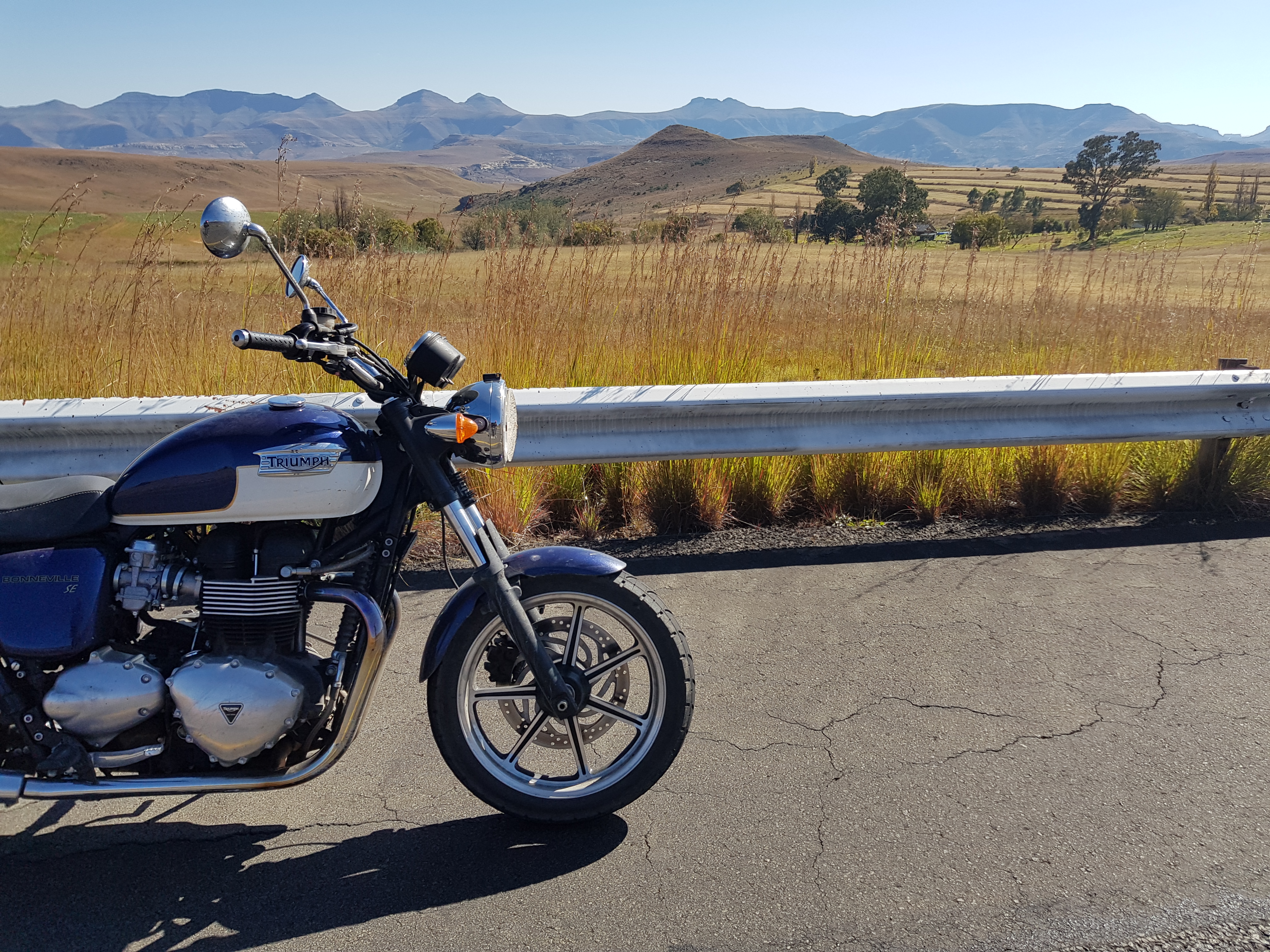 So once the dust had settled and I was healthy enough to ride again, I decide to buy a bike. This bike needed to check a few boxes: be within budget, relatively low mileage, hassle free, can handle dirt roads, be good enough for a long trip and most importantly look cool (again my idea of cool is probably different to yours, and you ride a GS. I won’t judge you if you don’t judge me) so I bought a Bonneville. All of a sudden I was in love with motorcycles again, every time I got on the bike it was pure ecstasy. When there is nothing more to be said or to be done, I can climb on my bike and try to forget for a few hours of the miserable times and the more miserable ways of our fellowmen.

I needed to be in Knysna the first weekend of May for an annual boys weekend at the Simola hillclimb, a weekend where mates from JHB and Cape Town get together to enjoy all things petrol. So I had two sensible options – fly to George and hire a car or fly to Cape Town and grab a lift with mates that were headed to Knysna. Obviously I chose neither.

I decided the best bet would be riding there on the Bonneville and the least direct route at that. I sent out a few WhatsApp messages and before I knew it I had a few interested parties but only one committed to undertaking this journey with me! So like Frodo and Bilbo, Myself and Steve, who was riding a much more sensible KTM 1050, headed into the abyss, and by abyss I mean the N1. As you are aware the N1 isn’t the most exciting road, but eventually we devoured the 900 odd kilometres of cement wasteland and found ourselves on an olive farm in Beaufort West for the night. 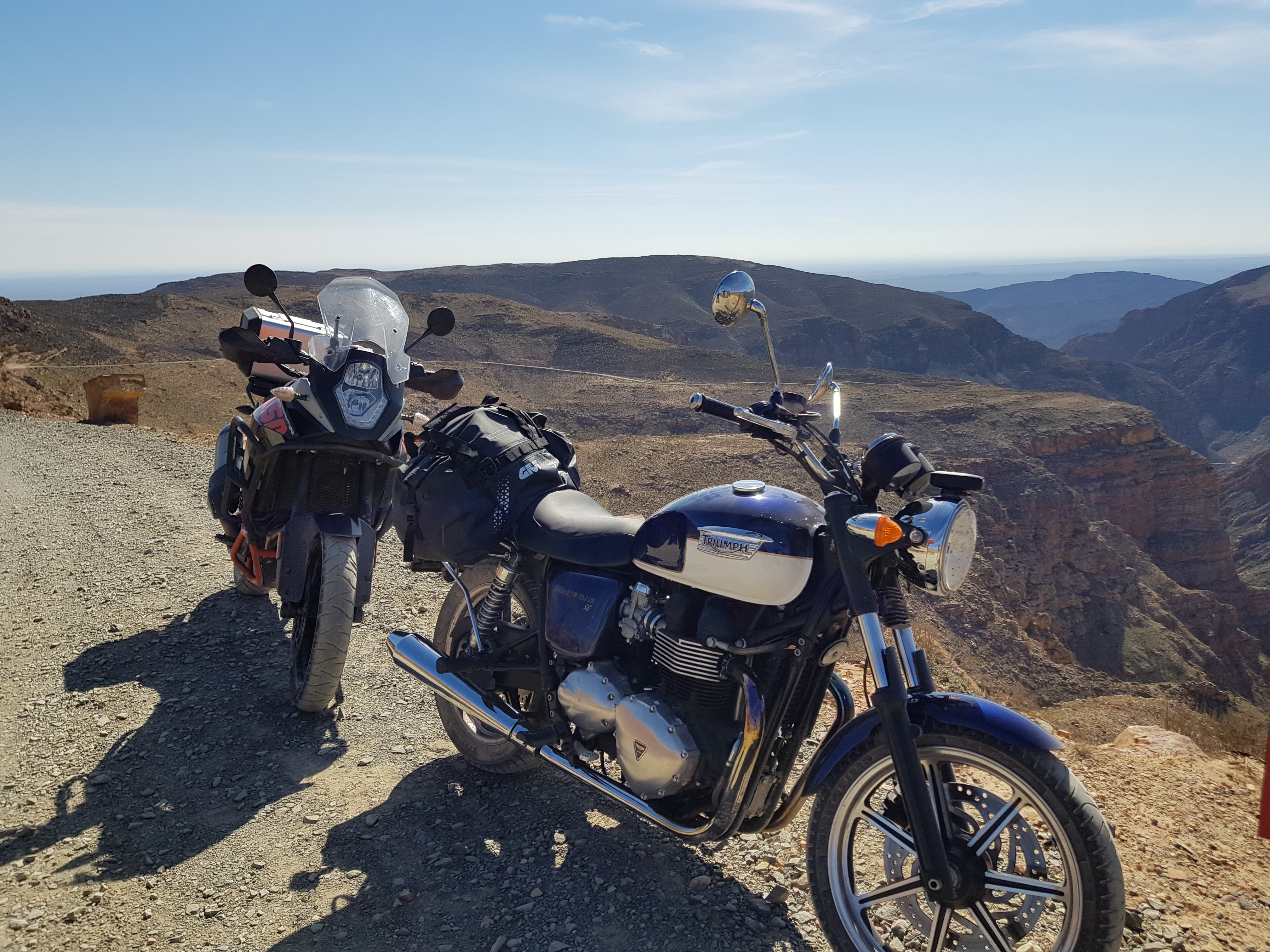 The second day was what I was looking forward to the most – I got to tackle the infamous Swartberg Pass. Knowing it needed more brains than brawn I thought my Bonneville will make easy work of it, which it did for about 500 meters from the tar road when my front tyre hit a pointy rock and succumbed to its injuries. Three plugs and a tube of tyre cement couldn’t keep the air in the pneumatic tyre so we limped over to Kobus se Gat, a little padstal about one kilometre from the start of the pass on the Oudtshoorn side. Kobus had a small bicycle workshop on his property where the staff were more than willing to try help, although after trying to remove the tyre from the rim and destroying a few spoons, we called it a night and left the bike without a front wheel balancing on an old Coca-Cola crate. 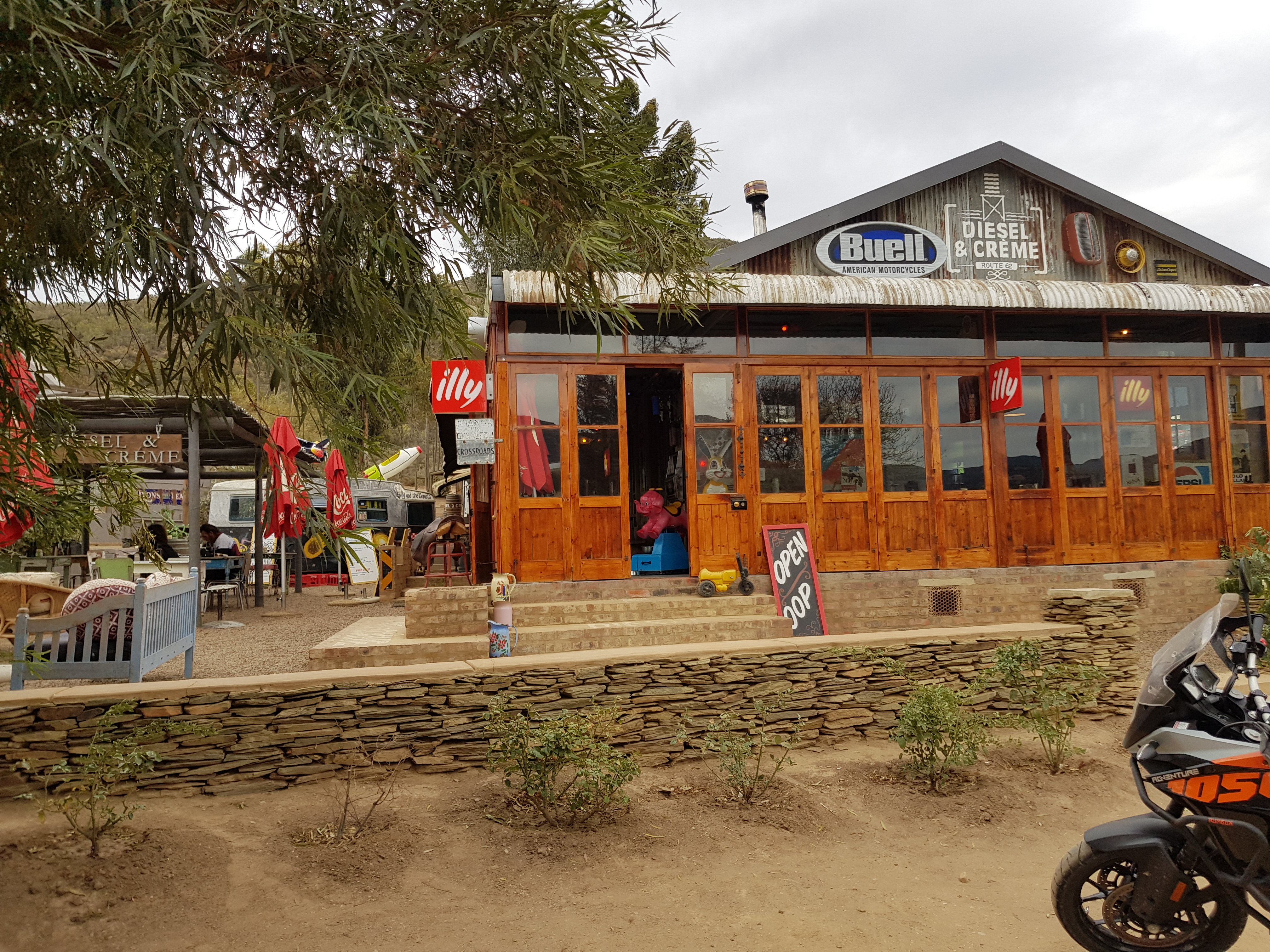 Shortly after waking up on Wednesday morning, Kobus had arrived back from Oudtshoorn with a new tyre fitted to my rim which we quickly popped in and hit the road. That days riding was unforgettable, perfect weather and nowhere to be so we hit the R62. After doing all the mandatory bike stops along the way at Ronnies Sex Shop, Diesel and Crème we finally made it to the end point of the R62 in Montagu. The sun was still a few hours from setting and we thought the logical thing to do was race it as it made its way towards the Atlantic ocean. Guess what, the sun won. About 50kms outside of Hermanus everything went pitch black very quickly and not long after that I started seeing little speckles in my head light it couldn’t possibly be rain, I thought, as we were in the arid Western Cape after all. Well f%$@ me it was raining. 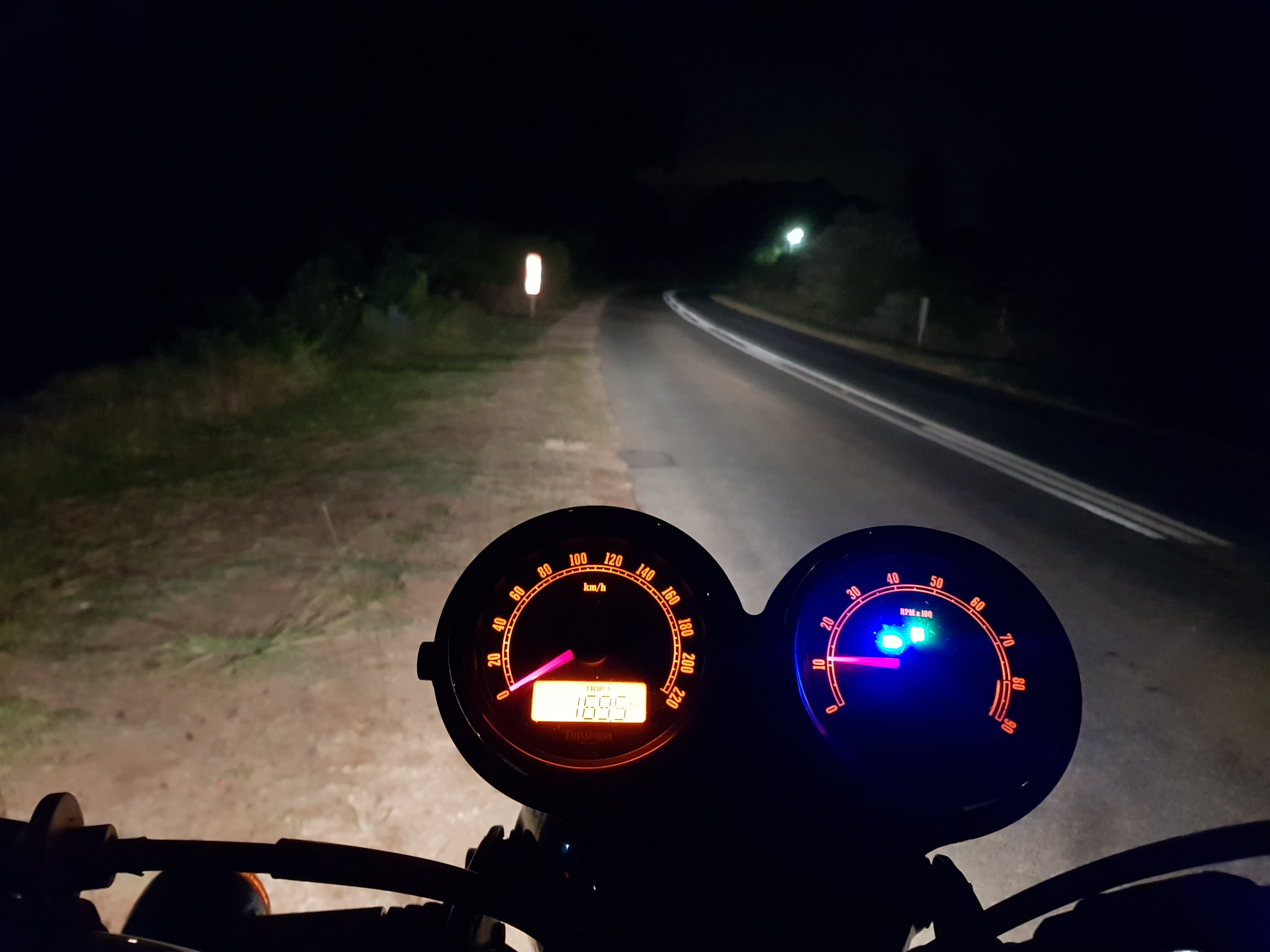 Waking up to the smell of the Cape reminded me a lot of an ex-girlfriend who had a tattoo of a sea shell on her inner thigh, if you put your ear to the shell you could smell the ocean.

Hermanus didn’t offer us much apart from a good breakfast and the only whales we saw were of the pink sunburnt British variety. So we got back on our bikes and made our way in the general direction of Knysna. This was the only part of the trip where I was nearly unhappy with my choice in motorcycle as the N2 was as windy as a heavy set lady who got carried away with the sauerkraut at a German festival. Being on a naked modern classic I had nothing to buffer the wind. Once I caught a glimpse of myself and the Bonneville in the reflection from a hubcap I saw how cool I looked and that was all forgotten. 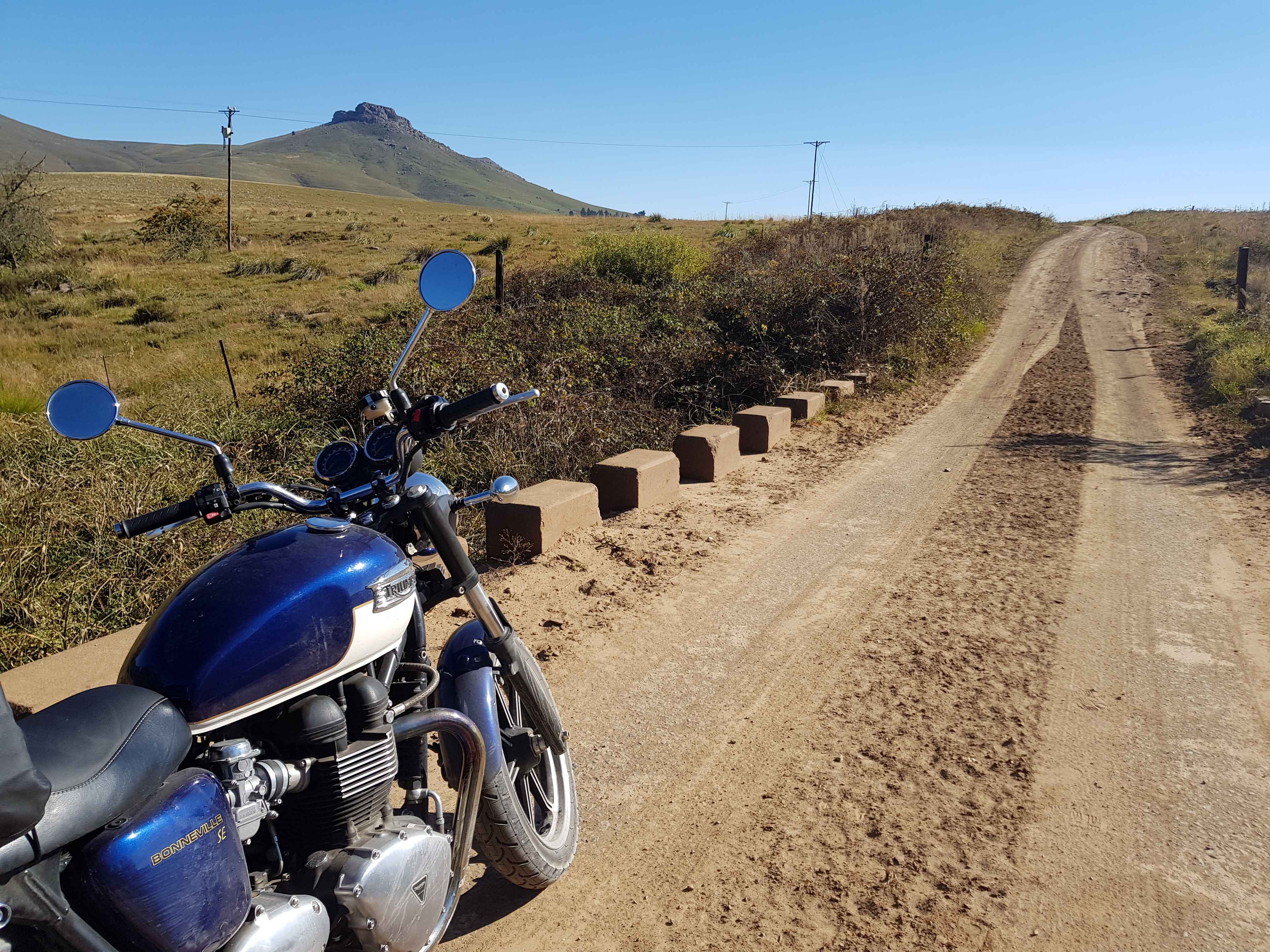 If you have not been to the Knysna Hillclimb I seriously recommend it. I am not the biggest fan of car racing but this is an exception – you get to be in one of the most beautiful parts of the country surrounded by the sound of old F1 cars mixed with weather changing fire breathers like the Ford Mustang Super Snake driven by lady racer Paige Lindenberg, it really is worth the effort. There are rumours of bikes making an appearance in coming years as well which would be amazing to see.

The trip home was just like the trip there, in the sense that we went everywhere but the direct route. It involved surfing in J-bay, playing dodgems with cars coming towards us after getting waved through a stop go by a lady who had recently been promoted from flag waver to walkie talkie operator, enjoying sun sets in Hogsback followed by 55kms of corrugated sand road to Cathkart then circumnavigating Lesotho to Fouriesberg. 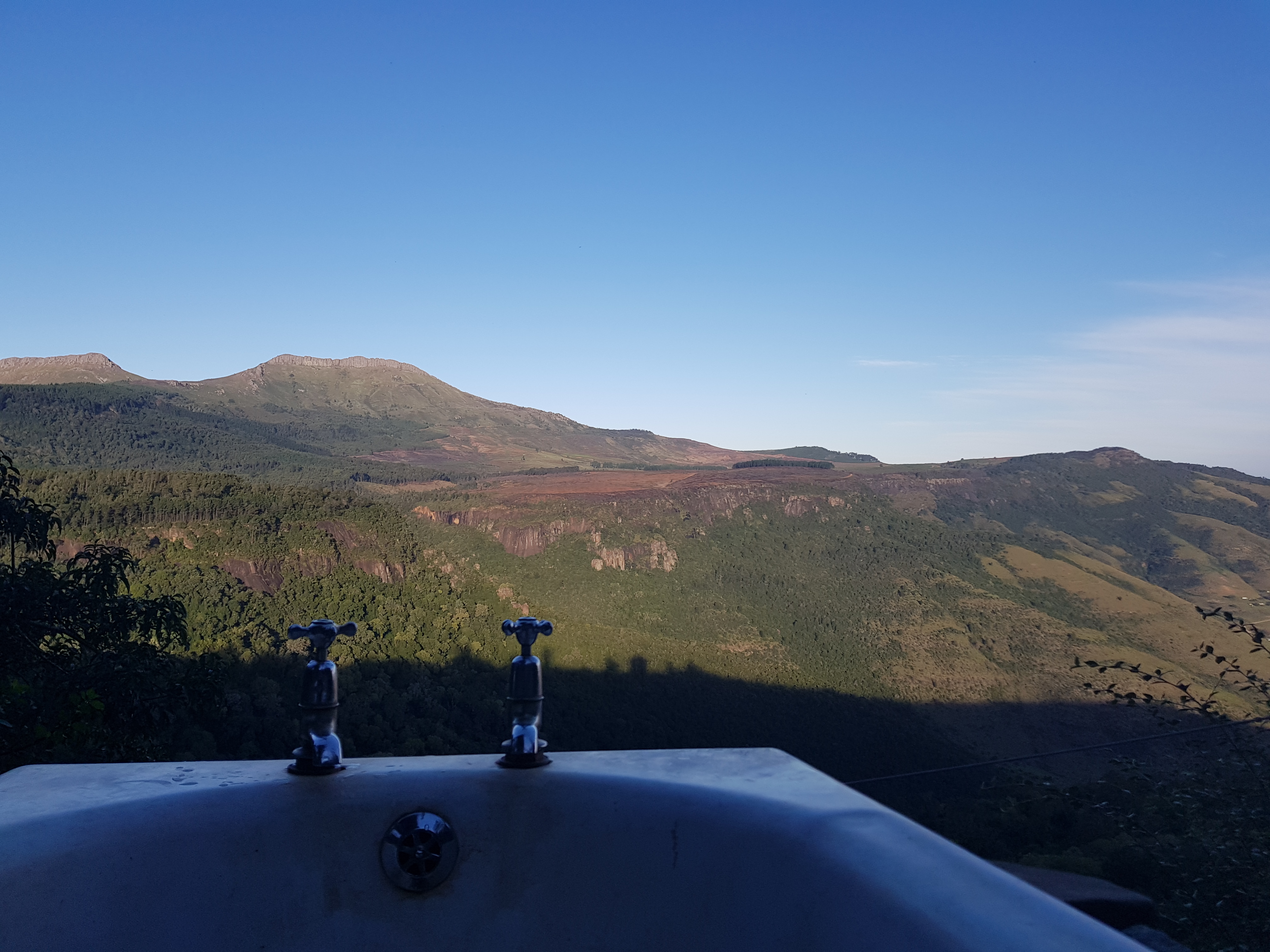 Famous Actor Laurence Fishburne once said “On a motorcycle, you can’t really think about more than where you are. There’s a freedom that comes with that – from stress, worry, sweating the small stuff.” This is what it is about, this is our escape. During the penultimate day 0n the road between Fouriesberg and Clarens (if you have not ridden this road, make a plan, it’s mooi bru), I started to think that my trip was nearly over, reality was about one day away. With this I thought that because I was coming home that my escape was over.

Alas It wasn’t. I discovered that every form of riding can actually be an escape, an escape from bad places that we create in our minds. We always think that paradise is over there, a day’s ride away. But it’s a funny thing this wanting to escape. You can go far and wide and you can keep moving on and on from town to town, but you never escape your own life.  Therefore escaping isn’t a place we go but a thing we do. It is a thing that actually teaches us about ourselves that we need to know when we not riding, an escape that gives you knowledge to change the bad place you were in. This led me realise where my life belonged. On a motorcycle.