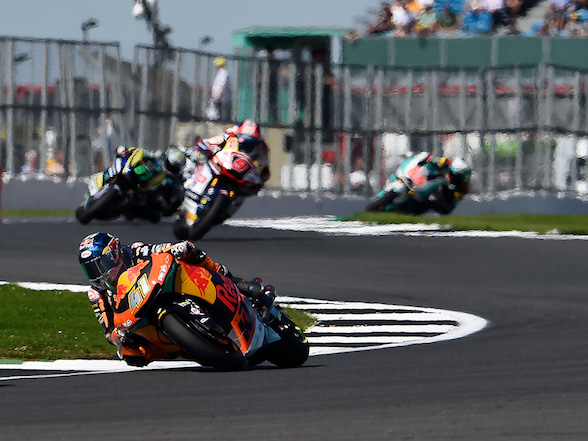 Binder rides from 20th to ninth at Silverstone

“I really need to learn how to set a fast lap in qualifying, because it’s very annoying to have to start from so far back. In the race I know I can be up at the front, I just have to work hard to get a good position on the grid,” commented Brad Binder after riding from a grid spot of 20th to finishing the first lap already in 13th and finally crossing the chequered flag in ninth.

“Looking at the weekend overall, I am happy I gave 100%, even when I didn’t feel quite right; on the last few laps I felt better but I was not completely comfortable. I was able to get into the Top 10, so I’m satisfied with that. There is still a lot of work to be done, but I know that step by step we can be stronger and finish higher up.”

After the race he was his usual, smiling self, but there was a good deal of frustration there too. He knows he should be higher, but this is a learning process, not just for Binder, but for KTM and their new Moto2 machine also.

He hasn’t quite figured out how to run a hot qualifying lap on new, sticky tyres and low fuel levels yet. This is not a problem reserved for Moto2, but for much of his riding career. You sort of always knew that if he qualified within the top five, he could win quite easily. The fact that he managed to get poles last year shows how dominant he was in Moto3. If he can start closer to the front in Moto2, some good finishes should be far more easily forthcoming, as his race pace shows.

The major problem faced by Binder this weekend was midcorner turning, meaning the bike wanted to run wide when leant over. This was evident when watching him on track, especially when riding in a group. Brooklands is the third last corner on the track. It is tricky as it is at the end of the Wellington Straight and riders have to brake hard before running the bike into the left hander. It starts out flowing, but gradually tightens up as you go, meaning riders have to keep increasing their lean angle in order to hit the apex at the very end of the corner.

In all motorcycle grand prix racing, unlike track day riding where being within a metre of the inside of the corner constitutes an apex well done, apexing means riding over the painted white line that borders the inside kerb, or possibly riding over the kerb itself. It’s that level of spot-on accuracy that is part of what makes these guys a step ahead of the rest. This was quite apparent while watching from the entry of Brooklands during qualifying, where each of the 34 Moto2 riders were clipping the inside kerb with pinpoint accuracy, except one Red Bull KTM that seemed to be working harder than the others to get his bike there.

In track day riding, missing the apex means you were on another continent at the time. In Grand Prix, this means that you were just a few centimeters out, but at that level, it could be the difference between first and 20th.

Obviously, setup is the major factor here, but there could be some additional assistance from the rider itself. Another notable factor when watching all the Moto2 riders at the same time is their body positioning on the bike. In Moto3, riders sit a little more on top of the bike when cornering. This is because the gearing is shorter while the bike is on its side and keeping the bike leant over for longer means getting better drive out of corners on these smaller bikes. When you move onto bigger machines like Moto2 or, more so, MotoGP, lean angles are the enemy.

That’s why you see this new, elbow down, face on the floor style of riding. The lower centre of gravity caused by hanging off so much means the bike needs less lean angle to achieve the same turning radius. Plus the rider can then stand the bike up and accelerate hard out of corners with less lateral forces interfering.

There is a notable difference between Binder’s position on the bike while cornering and everyone else. He has spent nearly a decade riding 125/Moto3 bikes, and that style is obviously difficult to shake, because it seems that he still has it. The hassle is that it means he needs to carry more lean angle than his rivals to achieve the same turning radius at the same speed. This causes obvious problems because it means more strain on the tyres and on the suspension.

However, as the tyres wear and the rear spins more, the turning actually gets better. In the beginning of the race, Binder was running in 13th and seemingly struggling to keep up with the group in front of him. During the last five laps, he was up to eighth and was running faster lap times than the leaders.

It’s Binder’s first year in Moto2 and, despite not yet completely grasping the new machine, he is consistently beating more experienced riders on more developed machines. If he just manages to just qualify higher, he will already be in with a shot.