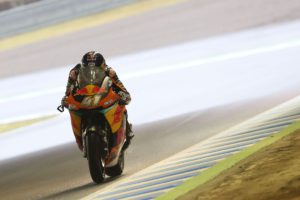 Weekends like these are especially tough on rookies such as Brad Binder. He was fast at this circuit last year on his seasoned Moto3 machine, but Moto2 is a whole different ball game, especially when he has never turned a wheel around this track on one. Friday practice at the Motegi circuit was drenched – seriously, another 39 days of this and Noah might have some employment. This is not the end of the world for the South African though, because he had the opportunity to further learn the wet capabilities of his Moto2 machine, improving slightly every time he left the pits.

At the end of FP1, he was 3.1 sec behind the leader, and had improved to 2.6 sec at the end of FP2. This morning’s FP3 session proved even more apocalyptic than the Friday practices, and despite being a second off his Friday’s best time, he had still decreased the gap to the leader to 2.4 sec.

Then qualifying got underway, and despite the rain finally letting up, the track was still very much wet and the weekend of practice had paid off as Binder found himself lapping within the top ten consistently. But, as is the way with physics and other annoying laws, the lack of rain meant the track started drying and eventually, with ten minutes to go, riders were able to switch to slicks and pin it.

This might sound like fantastic news, and it was for the riders wanting to let loose, but rookies like Binder had not yet turned a dry wheel on this track, and were given just ten minutes to come to terms with the different feeling, the different lines, the different brake markers and the different grip levels.

When the chequered flag was waved, Binder was in 24th place and 3.0 sec behind the pole-setter – home favourite Takaaki Nakagami.

This leaves the troubling situation of what to do in the race tomorrow. So far, the weather suggests that it will be cool with brief showers. If it is dry, the likes of Binder could be in a spot of bother as they are thrown in the dry deep end. If that is the case, we can only hope that the weather gods grace us with dry weather for tomorrow’s warm up so that teams can get at least some dry track practice.

With this uncertainty, let us rather hope that the heavens open and truly drench the circuit for the race. We know from his Misano performance that Binder can ride in the rain, and that he has had a good deal of practice this weekend. Either way – and this is starting to sound like a stuck record because we have said it every weekend this year so far and been proven right – Binder is a Sunday rider, and will surely show better pace once the lights go off.

Binder:
“Today was a difficult day. In FP3 I suffered a lot, but in qualifying with wet tyres I was fine and I took tenth place. Once the track dried out I wasn’t able to adapt quickly enough to the new conditions. I’m really disappointed to have only qualified in 24th position and I still have a lot of work left to do for tomorrow. We’ll see what conditions we encounter tomorrow, but I’ll do my best.”