Austrian MotoGP: The hammer, the butter and Marc being Marc

Austrian MotoGP Round-Up: The hammer, the butter and Marc being Marc 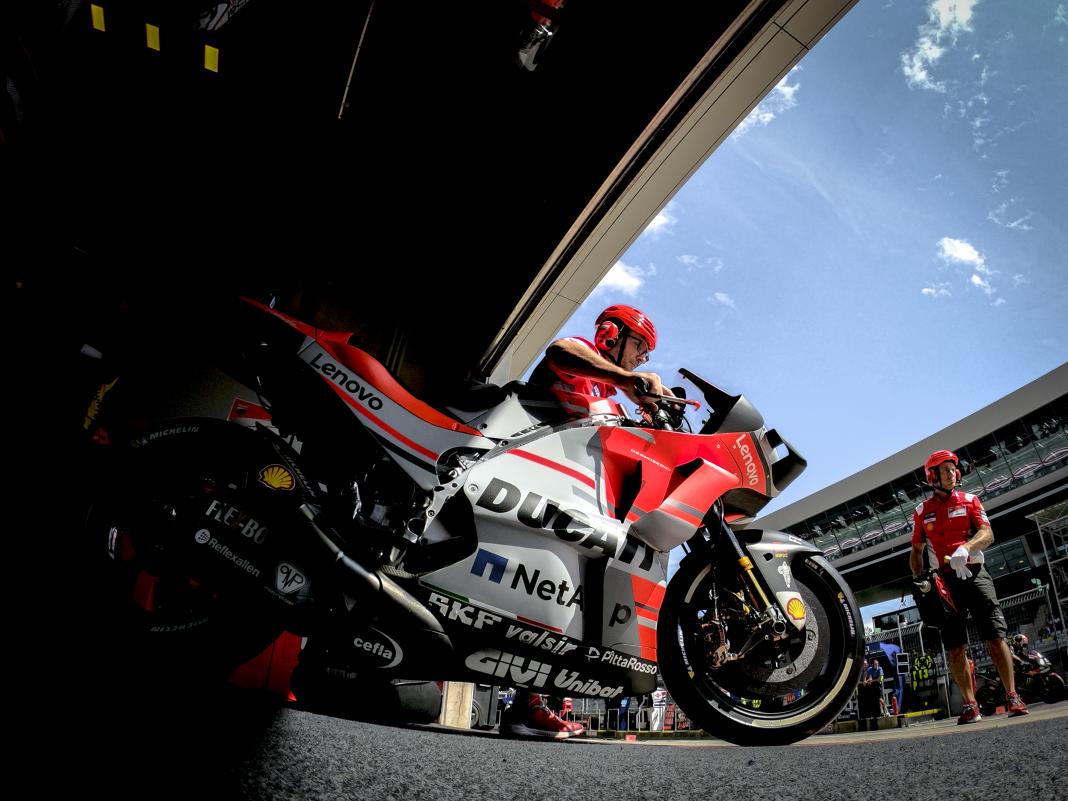 The Red Bull Ring is firmly Ducati territory; Marquez was out to make a point and who was to say that he wouldn’t be able to do so? It promised to be a fascinating race, even more so when the front row riders had all chosen a different rear tyre: Marquez on a hard, Lorenzo on a soft and Dovizioso on a medium. Lorenzo, indeed, had chosen to go soft/soft so surely he would be at the front to begin with and fade later in the race? We know that he is super smooth and easy on his tyres but when you have Marquez and Dovizioso hard-charging on his tail, would he be able to slow the pace down enough to conserve his tyres and have enough left to fight with at the end? We could only wait and see.

If you are wondering why there has been no mention of the Yamahas so far, that is because Vinales was in 12thand Rossi a frankly unbelievable 14thafter properly cocking up qualifying. This prompted Yamaha to issue an unprecedented public apology after qualifying, basically admitting that they were crap! 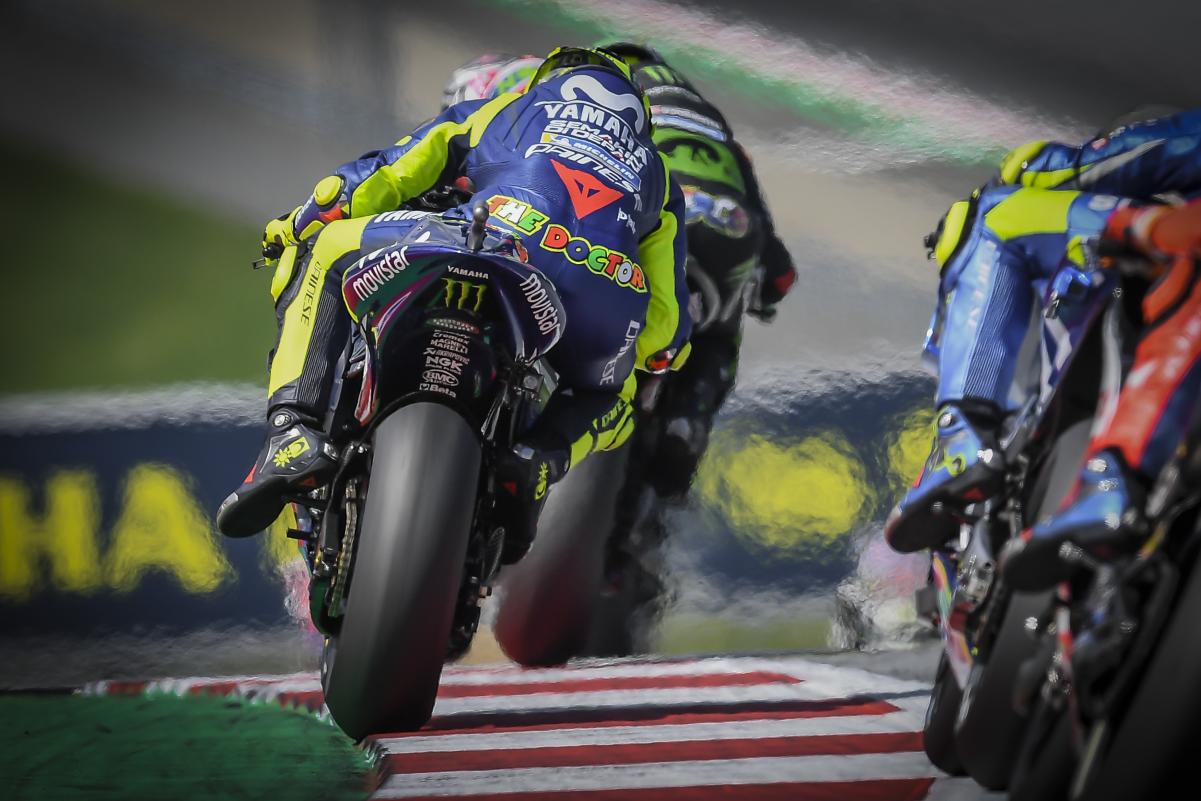 And so to the start. Dovi seemed to get the best launch and so it proved as he led through turn one. Marquez was lining him up along the long, curving run to turn three and duly dived up the inside under braking for the very slow corner. Dovi tried the undercut but Marquez had slightly out-braked himself and was slower than he needed to be, causing Dovi to nearly hit Marquez’ back wheel, so sitting up which allowed Lorenzo to get better acceleration out of the corner and take the lead.

Behind all this, Rins had made a flyer of a start and was challenging Dovi for third on lap one but soon dropped behind Crutchlow, Petrucci and Zarco.

But, really, this was going to be a race between three men and two makes of bike. Lorenzo really wasn’t streaking away as he should have been on the soft tyres and Marquez duly got by at turn three on lap two. He knew how quick the Ducatis are at this track and he got his head down and set fastest lap after fastest lap trying – and succeeding – to build a gap. Seemingly the Ducatis had no answer to this pace and certainly no-one else did: Crutchlow was a full second behind the leading trio after only five laps. Rossi was slowly making his way through the field and lay ninth while Vinales was down in 16th! 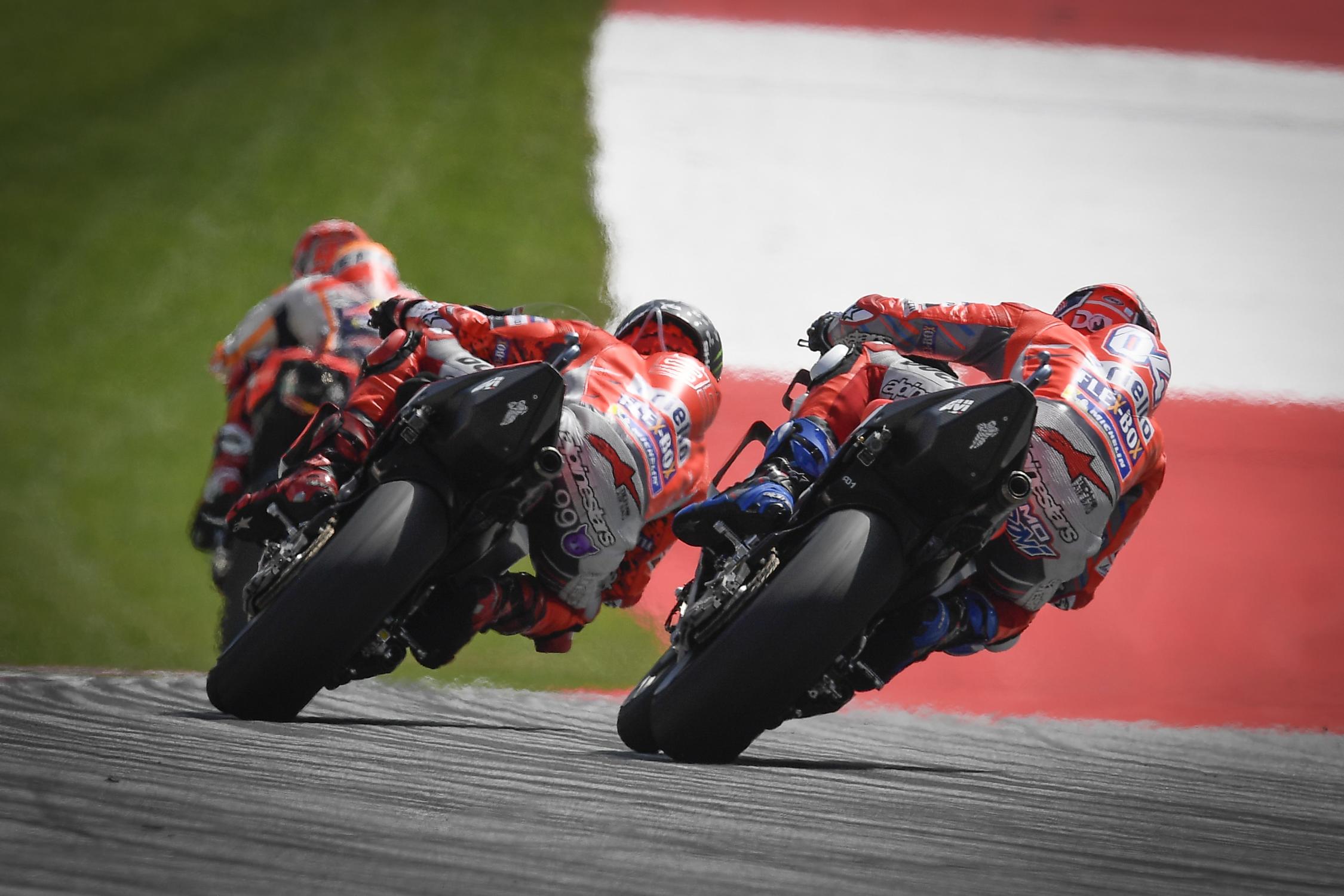 Still Marquez piled on the pressure. He posted yet another fastest lap on lap 8 and, even though Dovizioso matched it, he was a second behind Marquez and seemingly stuck behind Lorenzo who couldn’t – or wasn’t trying to – match Marquez’ pace, while still being quick enough to keep Dovi at bay. It looked as if Dovi had the pace to catch Marquez but Lorenzo is never the easiest rider to pass and he certainly wasn’t going to do his team mate any favours.

At half distance, Marquez led Lorenzo by over a second but then, in the space of a lap, the picture changed as the Ducati pair closed to within 0.5seconds of the Honda. Ever closer they came until Marquez’ lead was completely eroded and we had a race again, still with 11 laps to go. 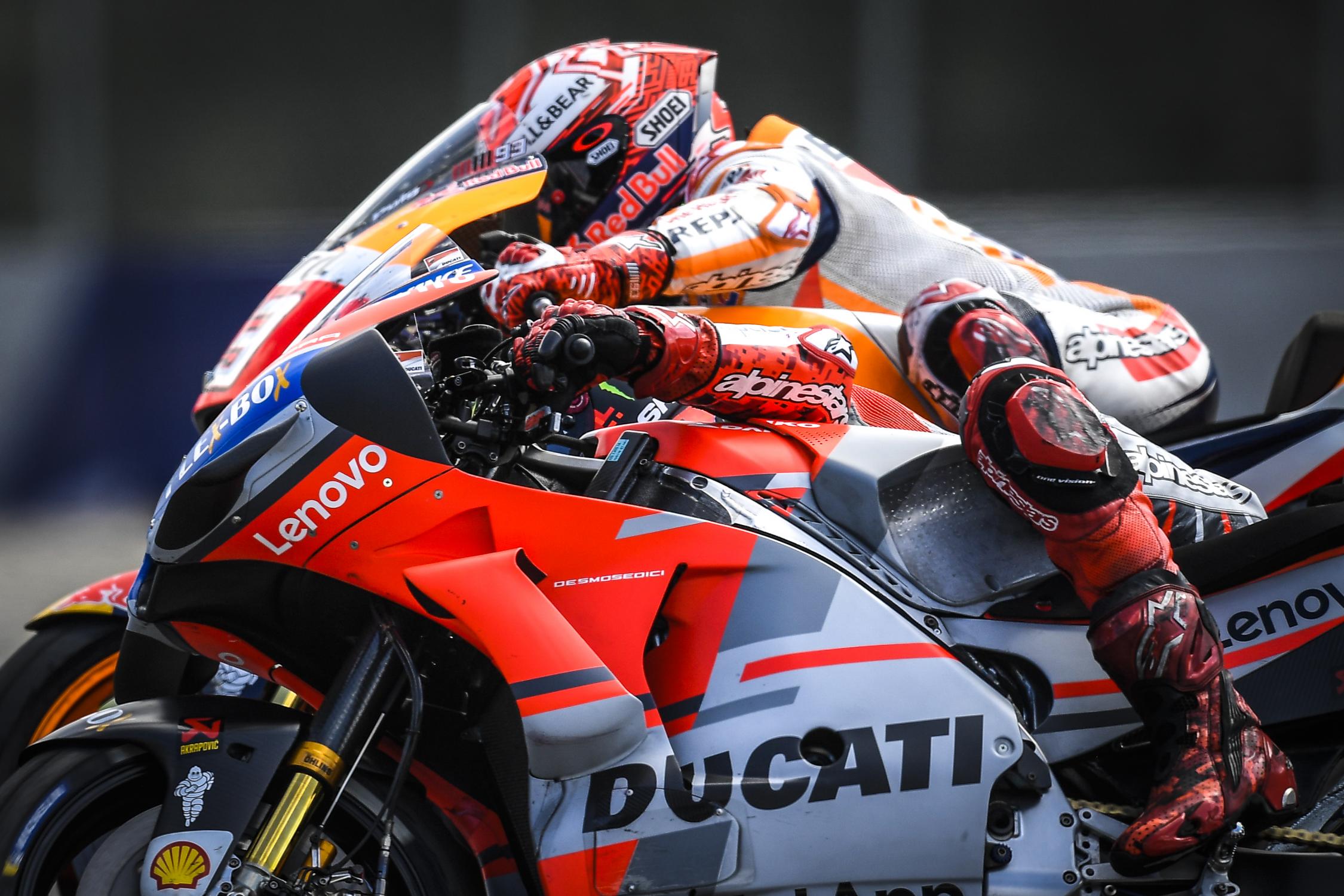 Lorenzo was looking really menacing now and he dived under Marquez at turn one on lap 19, only for Marquez to re-take the lead at turn three and lose it again at turn 9! Dovizioso, meanwhile had royally messed up turn three and had to avoid hitting Marquez’ rear tyre, losing 0.7s and effectively putting himself out of the running.

It looked as if Lorenzo might be pulling a gap on Marquez but not so and the two went at it hammer and tongs. Lap 26 (out of 28) and Lorenzo messed up at turn three and let Marquez through, only to get back in front again at turn 9. Back to turn 3 on the penultimate lap and Marquez went by once again but, then, on the last lap, Lorenzo took the lead at turn 1. Marquez tried again at turn 3 but Lorenzo, on the outside line, picked up his bike much quicker and simply powered ahead again.

This was going to be tight and surely Marquez would have another go but Lorenzo was always just that little too far ahead. Marquez never gives up, however and, at the line, was only 0.1 seconds behind. But that’s still second and Lorenzo won his third race of the season in majestic style. 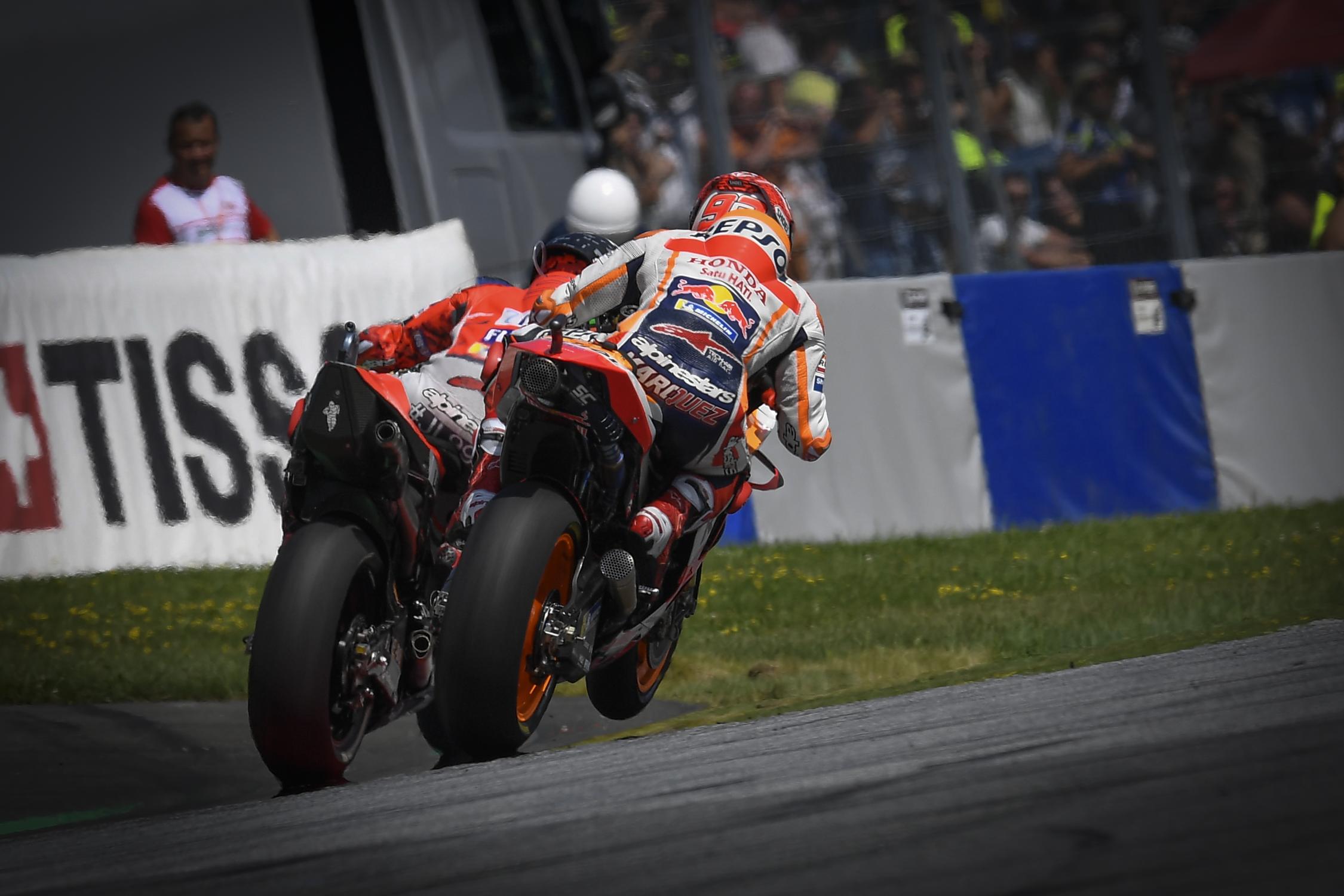 Dovizioso was a dispirited third, having used up his rear tyre trying to pass Lorenzo for so many laps, while Crutchlow came in a lonely but still brilliant fourth. Petrucci, Rossi, Pedrosa, Rins, Zarco and Bautista rounded out the top ten while Vinales finished twelfth behind Rabat. A works Yamaha behind five satellite bikes? Something is going to have to change at Yamaha.

All this extends Marquez’ lead over Rossi in the championship to 59 points, while Lorenzo moves into third, 12 points behind Rossi and one point ahead of Dovizioso. At this rate, it would be a fool who would bet against Marquez taking his fifth title but if the Ducatis can keep up this momentum, then it’s going to be mighty close come season’s end. And, if that happens, then we, the viewer, will be the winners.

Previous Post The Bonneville Escape – from near death to a Triumph adventure
Next Post Brad Binder on Austria: "I felt I could fight for the podium"