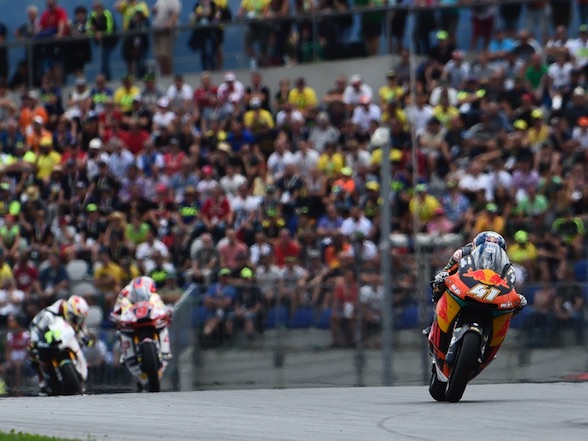 A personal best finish for

It was a good day for Brad Binder in Austria as he managed to come from 17th on the grid to finish seventh in the race. After a good start the South African avoided a first corner pile up to fight alongside his team mate, Miguel Oliveira. “I was fortunate to be on the inside of the first corner, so I found myself up in seventh after only one lap. That compensated for the fact that we did not have a good qualifying session, since we started very well. I pushed very hard in the beginning, although later the rear tyre dropped off a little and I made a mistake, so I found it hard to be able to fight with my group again.”

Oliveira went on to challenge the leaders, and came very close to securing KTM’s first Moto2 win before highsiding massively out of turn seven and, thankfully, walking away without major injury. Binder ended up in a scrap with Takaaki Nakagami, a rider potentially destined for a Honda seat in MotoGP next year, and finished the race in seventh. This matches his best finish of the year, which was previously at Sachsenring, although today he managed to slightly decrease his gap to the winner, Franco Morbidelli, to 9.018 sec, despite the slight tyre woes.

“Overall I’m happy, it’s been a positive weekend and I want to thank my team setting up the bike so well after a crash this morning in the warmup. I’m looking forward to the next race.”

It also means that he is lifted to 16th in the championship with 38 points, which is not bad for the rookie when you consider that he missed three rounds earlier in the year due to his arm that he re-broke at the Argentinian GP.

The next race is at Silverstone in the UK on 27 September.