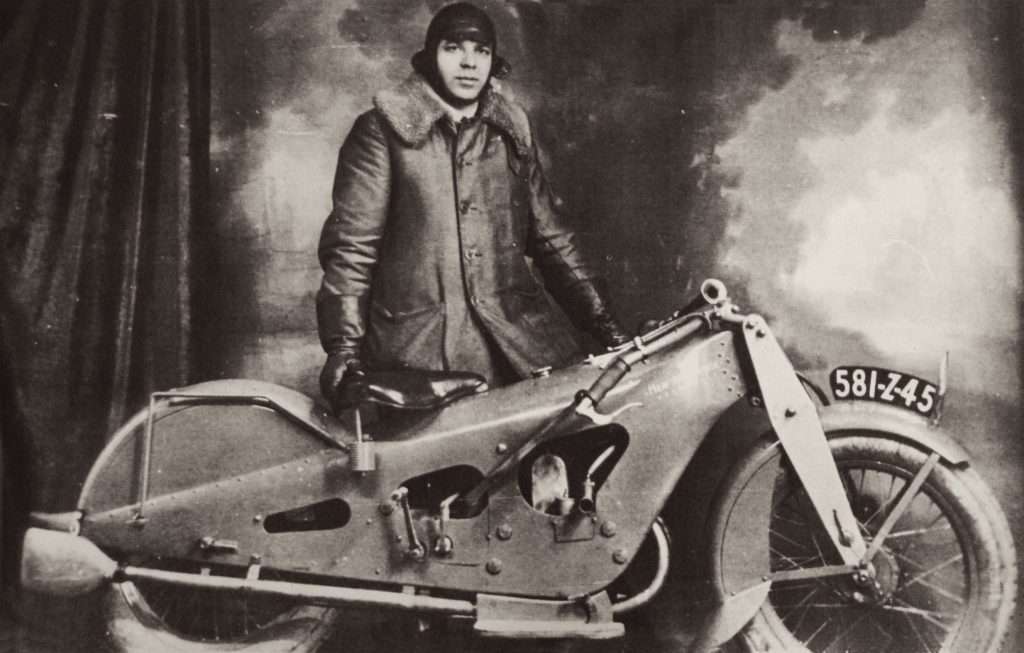 Prior to this much debated school holiday, my son had to choose a country for a school project; and from the typically-unimaginative-so-it’ll-be-easier list given, he chose France.

They had to gather some very specific info – capital city, language, currency, food, landmarks… You know, the obvious stuff.

Annoyingly, they left out any form of transportation. This robbed us of the opportunity to shove some motorcyclean curiosity into the otherwise mundane world of the School Project.

So, in an attempt to get it out of my system, herewith a short rambling on a piece of French bi-wheeled artistry.

Modern day France is hardly renowned for its exotic motorcycle manufacturers. Sure, MBK and Peugeot happily churn out little city scooters and those things called ‘mopeds’ by the hundreds, and Peugeot recently showed off a new lightweight motorcycle concept; so there might be hope for them yet.
Before the objections start. I know they used to make motorcycles some millennia ago. And I know they weren’t ugly.

There have been countless makers of motorcycles attempting to bring ‘flair français’ into the two-wheeled world over the last century; the majority of which were seen during the Art Deco, post-war-but-pre-depression era. Unfortunately, most of them were brought to a rapid demise when the Depression hit.

One such maker was Georges Roy, who ended up creating one of the most popular art pieces amongst the Art Deco motor-historian-slash-collector folks.

Georges wanted to make motorcycles nicer; he felt the engine-impregnated bicycle look was sooo pre-war. This guy must’ve time-travelled, or had a dream of the future, because when you look at his first attempt at (literally) reinventing the motorcycle, you’d see something that resembles a much more modern way of bike-building. Maybe squint a little.

This rather futuristic creation was dubbed the New Motorcycle – very original, my guy.
As with most things that dare to leap decades ahead of their time, the New Motorcycle didn’t do too well. Soon, Mr. Roy decided to design something different, but a little less extreme in its differentness. And so, the Majestic was born.

Now, saying that the Majestic is ‘less different’ is something of a paradox. It reverted back to a more traditional bicycle-like frame, yet slung over that frame were great, curved expanses of sheet metal which enveloped all its movey-bits – safe for the wheels.

The first ‘concept’ shown to the public in 1929 was – reportedly – Roy’s own ride, which sported a meaty 1000cc four cylinder, longitudinally-mounted Cleveland engine. The production models ended up stuck with either a 350cc or 500cc option. So that tradition of making cool AF concepts, then trimming off some of said coolness for the public version is nothing new. Bastards.

Size aside, the production version’s power plants were sourced from Chaise. Apparently at least two were built with flat, 750cc JAP blocks poking through the bodywork, and a handful of other engines were rumoured to have made their way into one or two Majestic bellies.

The two main Chaises featured a ‘bacon slicer’ flywheel, which still sounds like it’s going to turn you into everyone’s favourite breakfast meat thins. They were air-cooled, which is likely why the Majestic looked like a gaping whale shark – albeit a whale shark that had gone on a supermodel diet.

Because for all its panels this thing is as slender as the hot next-door neighbour you’re banned from talking to. Almost as curvaceous, too. All it needed was two headlights instead of one, and it might as well have been said neighbour.

For 5200 Francs you could buy yourself a 350cc Majestic which used a chain to transfer the round-and-round motion to the rear wheel. If you felt extra spendy, you could fork out another 500 Francs for a shaft. She was certainly not a cheap lady to own.

Have I mentioned the sheer cleverness of the front hub? Not only did it link with the unusual steering assembly, but it also doubled as the drum for its front brake. It was so darned exclusive that he had to make it in-house, since no external manufacturer made anything like it.

Which brings us to the steering – some mechanical tomfoolery comprised of rods, racks and pivoting things. The front suspension was made up of two dead straight, sliding pillars. The rear was as solid as most were back then. Hey, you did have a fancy, springy, leather seat!

Handling? Surprisingly good, for a hub-steered 1920s motorcycle. Some modern test riders mentioned its front end ‘hunting’ at city speeds, meaning constant rider input was needed to keep the lady from wandering off. At ‘high’ speed, however, it stopped hunting and became a train.

The first Majestics had ditched the futuristic monocoque chassis for more ‘familiar’ rails – but it didn’t take very long for Roy to reintroduce the monocoque. Apart from the body panels which were now fewer in number, it still sported identical styling. When looking for the cover image for this article, I rapidly realised that the older, railed models are far harder to find. As you can see, I managed.

And as you can also see, the Majestic looks even more, ah, majestic with a matching Bernardet side car bolted onto its right flank. Oh, the style of yesteryear!

Shout out to Roy for that perfect execution of the chrome fishtail exhaust. Hooo baby.

One more thing worth mentioning is the intriguing paint option you could have applied to your Majestic: craquelé; or, for us non-French folk, craquelure. This was a complicated process executed by master painters, where two contrasting – and incompatible – coats of paint were applied over one another, causing the upper layer to crack in an even pattern, showing the first colour underneath.

Back then it wasn’t something just anyone could achieve. Today, you can buy nail polish that does the exact same thing at your local beauty stockist. Hell, even the China shop has. How times have changed!

The Majestic survived until 1933, having been sold by Roy to Établissements Delachanal in 1930, who in turn were taken over by Omnium Métallurgique et Industriel – Chaise’s parent company – at the start of the Depression in 1931.

But by ’33 its sky-high manufacturing costs, along with abysmal sales figures, finally dug the grave and buried the Majestic for good.

Holiday reading: a South African review of riding in England